Here is one more safety tip by Marci, as learned on the job at the new house; How to use the Man Lift

When using a man lift, always keep the engine running. It might initially seem like a good idea to save fuel by turning off the engine when you feel like you'll be in the same spot for a while, but it is actually not a good idea.

Here's why:  While the man lift may start up again reliably several times in a row, there will be the one or two times when you can't start it up again from the controls that you have in the bucket waaaay up in the sky. 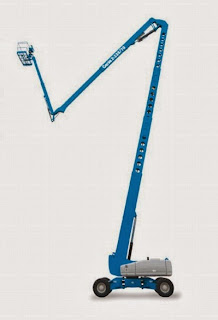 And, while the man lift DOES have an emergency horn, it turns out that nobody on a busy job site will actually come to your aid. In addition to honking the horn, some other unsuccessful methods for getting help include:
Other unpopular moves in the man lift include driving it axle-deep in the mud.  Apparently the only way to get it out of that kind of mud is to push it out with an excavator.