The delivery was not the piece of cake they make it out to be on TV, but now that it's over, who cares. Look at him! What a cutie 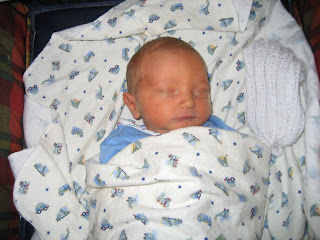 This little boy decided to flip breech on the Monday before the 25th, which meant we scheduled him to be flipped and induced on the 24th. The night before the inducement, he flipped again to the right position, so we just induced.

11 hours later, we were ready to start pushing, but it turned out he was facing the wrong way (back to front) so they pushed him back in and gave me a C-section at 4 am on Friday.

I was pretty tired after all of that, and it seems I am a little too sensitive to the epidural medicine. That stuff made me throw up during the later stages of labor and constantly during the C-section. I suppose that's why my tummy was stitched back together a little off center.

Now that it's over, I have a little boy wwho is more adorable than I had thought he would be, and the bonding is going well. I'm a proud momma.
Posted by Editor at 4:12 PM 2 comments:

On Sunday night I started to really feel foul. I know the last month of pregnancy isn't supposed to be a high energy time, but this was really something exhausting and uncomfortable.

Thinking I was in labor, I went to the doctor on Monday after tracking irregular contractions about 7-10 minutes apart. She said that our little Ham Slice wasn't even close to coming out, and that the reason I felt so yucky was that he had turned almost completely breech.

We went for a quickie ultrasound, and sure enough, he was laying across my belly like a Miss AMERICA sash with his buns lodged off center in my pelvis and his head in my right lung.

So now we're scheduled to try to have him turned (Versioned is the medical term) on Friday morning, with an immediate induction after that to get him out. If that doens't work, it's C Section time.

I told Hambone that Ham Slice was acting "Just like a Man" and isn't asking for directions to find the right way out. Hambone says he thinks the baby has inherited his Mother's sense of direction.

Either way, Friday is the day. We're all looking forward to that. In the mean time, I am staying at home under doctor's directions to "keep your butt above your head as much as possible." We'll see how that work out for me.
Posted by Editor at 11:14 AM No comments:

I've been reading in my baby books that around now I should be hit by this "big burst of energy, and the need to clean my house." This is otherwise known as 'nesting.'

I have not, however, experienced this in the least. But what's funny is that I think Hambone is experiencing it by transference.

Last weekend I found him on his hands and knees in the kitchen with a scrub brush and a bucket of soapy water, muttering "Filthy. This is just filthy." He was referring to our tile floor that neither of us have paid much attention to in the three years we've lived there. He wanted to run to the store to get a scum buster because he felt that the grout was simply not getting clean enough with the scrub brush. I was sure he had lost his ever-lovin' mind.

If he was that affected, I can only imagine what will happen when (if) it hits me. Oy.
Posted by Editor at 3:58 PM No comments: