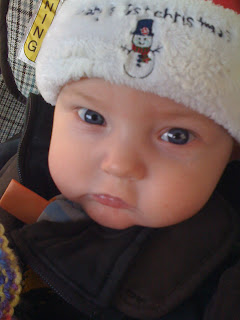 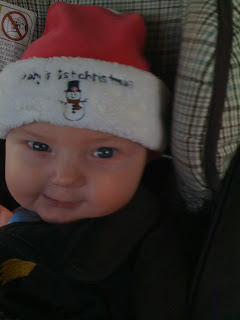 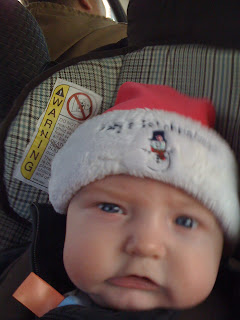 I was in the back seat with Hamslice this Saturday and snapped three pictures in a row -- what a range of expressions this guy has now. My Goodness
Posted by Editor at 3:36 PM No comments: Hamslice is now in the phase (I am sure this is the first of many) where he seems to be actively trying to freak Hambone and me out. When we change his diaper, and are reaching for powder or a new diaper or what have you, he turns his arms completely backward so that his palms face toward the ceiling.

The first time he did it was with Hambone. And poor Hambone was so freaked out he didn't even tell me about it because he thought he had injured Hamslice.

When he did it to me, I thought for sure I had dislocated his shoulder and was racked with guilt. I told Hambone and he started laughing and told me about how he had seen the same thing.

I see we're in for quite a ride here. With such a sweet little face, it's surprising to know there's a stinker in there somewhere.
Posted by Editor at 8:07 AM No comments:

For Christmas this year, Hambone bought me a subscription to the Cheese of the Month club, which was so sweet because I DO LOVE CHEESE.

The first shipment came to Hambone's office last week. He had it shipped there so he could surprise me with the actual cheeses. This round was all artisan soft cheeses, which tend to be a little...fragrant.

During that afternoon, one of Hambone's vendors came in, and said in a stage whisper, "I think something died in your office."

Later in the evening Hambone described the cheese aroma as "a dead rat wrapped in a dirty diaper." But, we were really curious to see what it would taste like, so we dared each other into taking a taste. We dubbed the event " Fear Factor Cheese Night. "

It was actually rather tasty, if you didn't smell it first. We ate most of it in a race between our tongues and our noses.

Ah, the things you do for love.
Posted by Editor at 5:13 PM No comments: 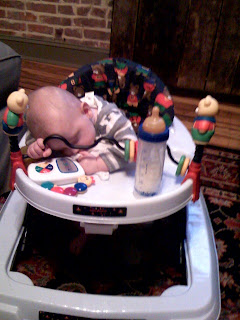 Hamslice is getting bigger all the time. Recently he's grown into his 9 month clothes and shows no signs of slowing down.

He is also starting to figure more stuff out. For instance, he knows that if he whines long enough, *I* will pick him up. And he knows that Hambone probably won't. He has different jokes for the two of us as well. It's pretty amazing if you asked me.
Posted by Editor at 9:26 AM No comments:

Porking it up with Kiddo

This weekend my brother "Kiddo" came to town and went Wild Russian Boar hunting with Hambone.

They got a good one (Kiddo tried the Maim-then-kill technique) and on Sunday we processed it into a couple of ham steaks, lots of sausage, and four killer racks of ribs.

Here's a picture of Kiddo making sausage. We make all our guest chefs wear that apron. =) 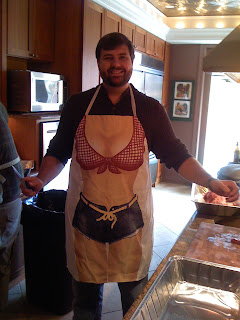 Posted by Editor at 5:04 PM No comments: