The new house has had a 130 year old ecosystem within its walls that we discovered as we went through the demolition process.

It started with the bees (which we found first) and the honey from the bees drew mice into the house. There were several dozen mouse nests in the walls, and we found one live mouse in the kitchen -- I had he exquisite pleasure of pulling down a piece of plaster with a mouse behind it.

As we moved down the house (from top to bottom) we found many, many snake skins. They were wrapped around the roof joists, the electrical wires, and many times the water pipes. Some were over three feet long. Eeeewwwww

But, now that we have displaced the snakes, the toads have moved in. Hambone just sent me a picture of the newest plague. 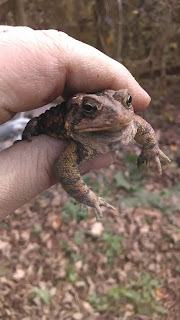 Posted by Editor at 1:06 PM No comments:

Understanding SPD by Being There

As we journey with Hamslice through Sensory Processing Disorder (SPD) together there are a lot of times we can forget about it, and there are some times where it comes right up to the surface and can't be ignored.

Yesterday was Hamslice's class field trip to a farm just outside White Marsh. I was surprised to see that Hamslice wasn't looking forward to it AT ALL, and wondered what an excursion like this meant to him.

At the Very Last Minute (there's that stellar Mom side of me coming to the surface...) I volunteered to chaperone the field trip and was gratefully accepted onto the bus that had no shock absorbers. After an hour of very loud and bumpy bus travel, we wound up at the farm.

Apparently, when traveling with 20 first graders and very few moms, there winds up being a lot of down time while lining up and counting the children. Hamslice did OK until the field trip started to break down because there were too many kids on the farm, which meant we were relegated to the corn field, where a very nice lady tried to teach the kids some songs about corn.

After the third song, he really started to lose it. Big time. I pulled him aside and asked what was the  matter, and he said that all he could hear were the other kids shouting. He couldn't hear his own voice to know whether or not he was on pitch, and it was super frustrating. Furthermore, he said, "You promised me this would be fun and so far it is not at all fun."  This, my friends is tell-tale SPD behavior. The blaring of sound in his head, the frustration  in processing it, and the blaming/anger.

So we agreed to stand on the perimeter of the class where he would be able to hear himself singing, and hear less of the others. That worked OK for him. We also splintered off of the group for a little while to do more in-depth discussion about sunflowers and caterpillars. Some of the other kids went with us to learn about which birds eat sunflower seeds, and to talk about whether or not bugs eat sunflower seeds.

By the end of the trip, both Hamslice and I were exhausted, but I think he really had too big of a day. On the bus ride home, he curled up in my lap and snuggled almost the whole way. And after school he fell asleep for an impromptu (and unheard of!) two hour nap.

We are still learning our way through what it means to be Hamslice, but I am happy that I am able to be with him to develop strategies and coping mechanisms for these situations. Event by event, one at a time we will get there.
Posted by Editor at 1:14 PM No comments: