I got a great deal with Living Social for the Urban Pirate Cruise in Baltimore, so for Memorial Day I gathered up the boys and headed to the Ann street pier. We were all quite excited about the trip, and didn't realize how much the weather would play into the trip.

When we arrived at the pier, it was just over 100 degrees with bright, oppressive sunshine. We went to the cruise masters and loaded up with pirate gear, including a head scarf, eye patch, and then (oh yes they really did this) a heavy pirate coat that was tied shut. 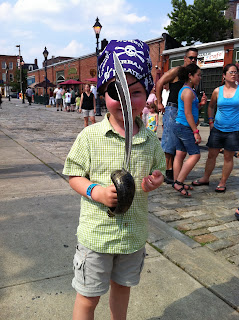 We took off from the pier, and the pirate mates were engaging the kids, having them sing and dance and stomp their feet, which would have been a lot of fun except for the heat. Within three minutes, one of the kids  passed out from heat exhaustion and split her chin open.

As the boat sped back to the pier, the crew distributed ice cubes, but kept the singing and dancing going at a fever pitch. There was one lady who I believe was over 300 pounds who was dancing with the kids, I had her pegged to be next, but she was surprisingly resilient.

I tried to take Hamslice's pirate coat off, and he got so mad at me. He said, "I'm a pirate and you're trying to turn me back into a little boy!"  so certainly I can't argue with that. Instead I doused him with water and hoped for the best.

One of the activities on the boat was to shoot at other boats with water cannons -- everyone thought that was hilarious. And the mist from the cannons cooled us all off immediately. Such welcome relief!  I stood right in the most misty part, and then realized that the water was salty.. hm. Harbor Water??? Yikes.

But we made it through, and Hamslice had a pretty good time. You can see his hot little face below. 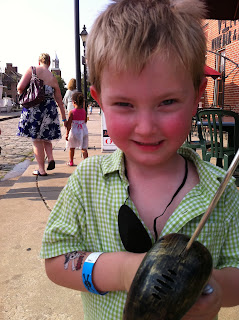 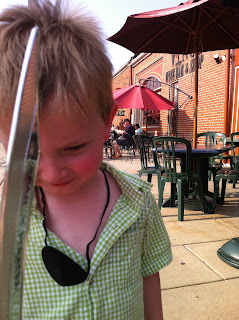 Posted by Editor at 2:35 PM No comments:

On Saturday we went to the Federal Hill Prep school fundraiser/auction/family day. We are grappling with where to send Hamslice to school in a year or two, and this day served to further confuse us.

For a while we'd decided we were elitist private school people, but then we weren't sure that fit anymore, so we started looking at the local public schools. I have no idea what the right answer is, but we had fun on Saturday anyway... 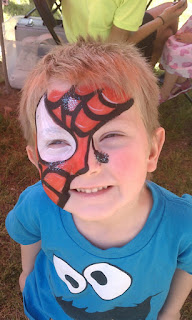 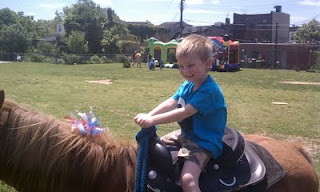 This is a funny one -- for some reason both Hamslice and Elwood know that when Hambone is in charge (and Mommy's not home) there is an open opportunity for chaos. I hear complaints about how the boy and the dog are always at odds and there's a lot of barking and shouting.

However, in the mornings when Mommy's at the helm... well... the pictures speak for themselves ;-) 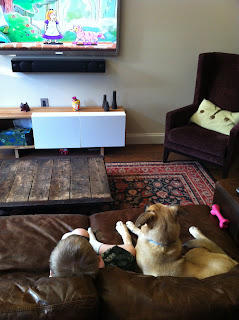 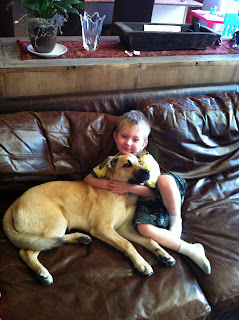 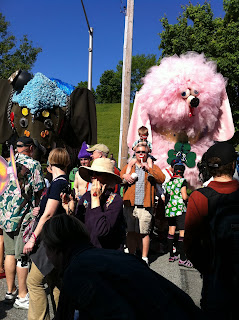 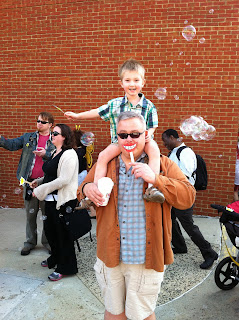 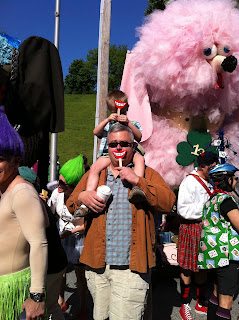 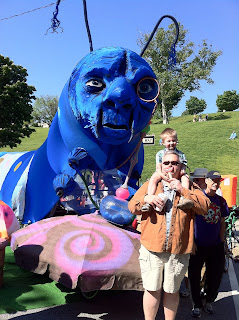 Posted by Editor at 8:44 AM No comments:

Yesterday Hambone and I were trying to bribe Hamslice into reading some words for us. We had a black box in front of him with the words "Black Box" printed on it. After a few tries, Hamslice did read the words, and then I explained to him that the words 'black box' were describing the fact that what he was looking at was a black box.

Hamslice looks at me and says "You know what, it's also a rectangular prism."

Months of the Year

Hambone and Hamslice had a running joke during the entire month of April, where Hamslice would say something that was silly and then shout "APRIL FOOLS" to Hambone.

Further probing revealed that Hamslice's current understanding of the months of the year looks like this: