Now that we know the baby is a boy, Hambone has been more excited than I've ever seen him. I mean, it's always hard to tell with him because he plays his cards pretty close to his chest, but there are some telltale signs that he can't wait...

I just love seeing our little family coming together with a mommy and a daddy and (of course) a gentle, giant doggy. It's exciting for all of us. =)

Posted by Editor at 9:48 AM No comments:

This weekend I crossed the 20-week mark and had my first taste of "Nesting" instinct kick in. Saturday I spent the whole day cleaning the house, washing the dog, brushing the dog, vacuuming the dog hair out of the back yard, mopping the kitchen, and then re-brushing the dog.

I felt like a character actress -- "I will be playing the role of a woman who is obsessed with cleanliness." Hambone wasn't sure what to make of it all, because we also have a maid.

Sunday I dragged him to Target because I wanted to buy everything for the baby on that exact day. "Registries be damned!" I told him. I wanted the stuff NOW.

He was very patient with me and explained that maybe we should just R-E-G-I-S-T-E-R for things at Target and then wait until my due date is closer before doling out cash on that stuff. So as a compromise, we didthat but it wasn't enough for me. I dragged him through the housewares aisle so we could buy a rolling pin, cookbook holder, trivet, martini shaker, pepper grinder, a new dog brush, squirrel toy and dog shampoo, batteries, drapes, lightbulbs and other random household objects.

Poor Hambone. Clearly his wife has gone mad.
Posted by Editor at 9:47 AM 1 comment: 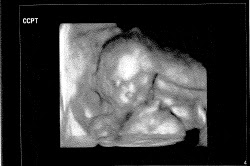 Hambone and I went in for our ultrasound this morning. Because I'm a tech weenie, I made the appointment way up in White Marsh so I could get a 3-d image of this thing we have created. No "regular" ultrasounds for me, no way.

When the baby first appeared on the screen, Hambone and I both gasped, because even with all the pregnancy fanfare so far, we were both wondering if I was just getting fat. It was amazing to see this little body appear on the TV -- no more denying it, we're definitely having a baby.

It turns out that we're having a little boy. The Ultrasound tech went over his little hoo-hah again and again, referring to it as "the Turtle." I didn't see the turtle very clearly, but she seemed quite sure. "See the turtle head? SEE?"

What also caught me by surprise is my instant transformation into one of those ladies who has to show everyone the ultrasound pictures. Even complete strangers now need to see pictures of our little Ham Slice. Even Hambone has a couple of pictures on his desk of the little guy.

I finally broke down this weekend and went maternity clothes shopping "for real" this weekend. I dragged poor Hambone along -- he was really a good sport considering where we were going.

It turns out that the maternity stores play this funny game with you: if you were a size medium before this all happened, your corresponding maternity size is EXTRA LARGE. Yeah, they like to kick you when you're down. I've gained a total of five pounds, but am now relegated to the XL rack, go figure.

This morning I had a big meeting for work, so I put on a pre-maternity skirt (another flash of denial) and found it was still surprisingly comfortable.

A little later in the day I looked at the skirt with puzzlement, because the seams didn't line up the way they should. Turns out I put the thing on sideways and that's why it still fit.