Catching up... Birthday, Soccer and more 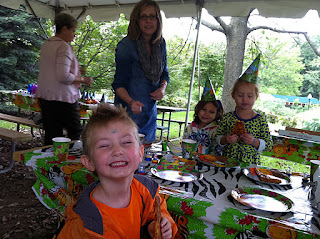 Hamslice's birthday came during a very active hurricane season this year. His original birthday party was cancelled because there was an actual hurricane that day. His new party date also came during a pretty good rain storm, and the rescheduled "opening day" of soccer for his team was the same day. It all worked together to create this party, where Hamslice had a marvelous time even though just three of his friends showed up. Avery, Ava and Olivia. I was so grateful to those parents for getting out of bed to join us on that raw, rainy day.

Note to self: don't pay for such an elaborate outdoor party next year -- hurricane season is every year, after all. 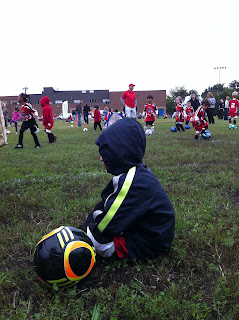 Our next adventure in parenting was Soccer. We put him on the local team, and Hamslice uniformly decided that he hated everything about it. See his teammates in red, whooping it up on the field while our boy just sulks?

We were finally able to get him to play by threatening to put him in bed for the whole day if he didn't get out there. Once he played a bit, he liked it.... but not too much.

We then vowed to get him some exercise through biking or hiking or something. Somehow this boy has to learn to enjoy himself while exercising. 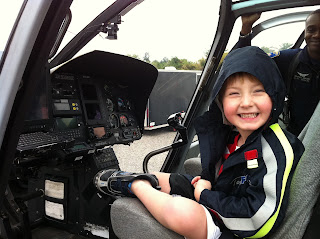 We took Hamslice to the firemen department's annual "Thrill Show" where everyone gets to ride in fire trucks and do fire stuff. We watched a car fire and saw how the firemen put it out. (Hambone noted the sergeant behind us turning the propane switch on and off, but I didn't believe him)

Hamslice got to sit in the police helicopter, and it really made his day. This is where we went right after soccer (see photo above) so I think we made it a decent day after all. 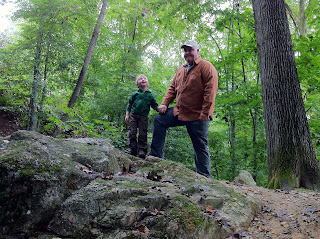 The next weekend we went hiking. Hamslice was in heaven. He asked us about moss and lichen and plants and birds, such a hunger for learning!

At the end of the hike we were showing him different sized leaves and he said "Right. Grande y pequeño." And that blew our minds, because we haven't been teaching him Spanish. Way to go Montessori!!
Posted by Editor at 3:10 PM No comments: