Today was Little Ham's first day of school. Oh such anxiety! Both boys were up at 5am, but Little Ham spent most of his time grooming for school. 45 minutes of hair combing, and packing/repacking his lunch box made him pretty busy. He wore his backpack most of the morning in order to be ready to leave at any time.

Finally to calm him, we left for school 10 minutes early, which meant 20 minutes of just waiting for the doors to open. He is SO excited!

Some of you have been asking how the 'sibling stuff' is going, and I will say it's a huge change. Hamslice and Little Ham bounce back and forth from Best Buds to Mortal Enemies several times each day, which has me and Hambone a bit bewildered. Hambone says it's normal boy kid stuff, so I'm just taking it as it comes. I have been measuring the ME time VS the BB times, and we do have a positive swing on the BB time, so I feel like we'll get there. They're doing special little boy friendship moves like showing each other their "business" and telling secrets.

Little Ham referred to Hambone and I as "Mom and Dad" when talking to his therapist on Monday, and when talking to the people at school. At home it's still "Ms. T" and "Mr. T" although I did hear a "Dad Hambone" slip out yesterday.

Current favorite activity to do together (besides the trampoline) is fishing in the pond behind our house. It's a nice quiet thing to do where they can just "be" without too much talking. 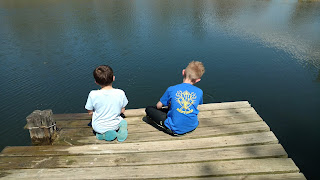 Posted by Editor at 9:43 AM No comments:

Little Ham has been working hard to integrate into the family. I am deeply impressed with his courage and resilience as he tackles yet *another* family (we are his 4th) and does his best to learn the rules and be friendly.

Yesterday I heard him muttering under his breath "Oh my gosh" over and over, which was a phrase I hadn't heard yet. It sounded peculiar -- not like his other phraseology and his intonation was the not the same as when he says other phrases. I listened and listened, and then realized that he was imitating *Me*.

With all of the unusual behavior in our family, I have muttered the phrase "Oh my gosh" as a little coping mechanism when things are just super bizarre. I must have been muttering this over and over this week as we were working on our family integration. It was adorable to hear it coming from this little guy and I choose to believe means I'm "in there" somewhere in his schema.

Yesterday Hamslice had "club friendship" which is his social thinking therapy group. At the end of group, his facilitators were beaming -- they couldn't believe how good his behavior was and how "in tune" he was with his group mates.  This is what we were hoping for all this time.

Regarding "getting in there"  with Little Ham, we had a good sign last night when we were reading before bed. Usually Hamslice leans against my shoulder and Little Ham sits to the side. Yesterday, Little Ham asked to sit on my lap and he leaned against my arm and did a snuggle for one full book. By the second book he wanted to sit on the floor, but I'll take a whole book's worth. =)

This morning at breakfast Little Ham was talking about his name, and how he didn't like his given first name. We talked about how we get to change it officially in 6 months and he gets to be "first name that you like" + "Our last name"  and he his comment was, "Can we do it in one month?"

Honeymooning is great stuff. Hambone says "Wait till the honeymoon is over." He's probably right, however this part is pretty cool.

Posted by Editor at 7:59 AM No comments:

Little Ham has been doing well here so far -- three nights in a row with no nightmares and no waking in the middle of the night to play with toys. He and Hamslice are also figuring out how to talk to each other with meaning. They are starting to have shared experiences and there is finally enough content to talk about that the conversation isn't just about "what I know" Vs. "what you know."

Hambone and I are amazed at how joyful it is to listen to the kids talk to *each other* instead of constantly to us. We had an actual sidebar conversation at dinner last night while the kids had their own conversation and that was like a whole new world for us.

Their favorite activities are "car trading" where they line up all their matchbox cars and trade for features like speed, color and shape  and they are also riding bikes together a lot. We made up a new game yesterday with bounce discs to start building motor control/regulation in both of them and that went well. Oh and they are on the trampoline a lot too.

It is interesting to listen to Hamslice talk to Little Ham -- when he is using his 'best personality' he uses a lot of phrases that I say and redirects conversation like I do. I honestly was under the impression that he had no idea what I have ever said to him. It makes me feel all squishy inside.

Little Ham is very thoughtful, asking for ways to help with tasks that I'm working on, and opening/holding doors for everyone. He is working so hard right now to earn his place in this family, and I wish he knew that he doesn't need to earn his spot, that it has been here all along.

Anyway, all the experts say this is the Honeymoon phase and the real stuff is coming yet. I am not sure what the real stuff is going to be, or how bad, so I am documenting the good so we have a breadcrumb trail through whatever comes next.

It took Little Ham and his social worker quite a while to navigate the airport and make their way to the house. They arrived at 2:30 am and I was up to greet them.

Little Ham's first thought was to give gifts to our family -- 1/2 bag of pistachios and 6 pieces of gum (two pieces for each of us, he figured). He then offered to sell all of his toys in a garage sale tomorrow to help raise money for our home.

We went upstairs right away for bed time. We read two books, Fly Guy and The Way I Feel and then I asked him if he was Mad/Sad/happy/Scared and he said he was happy. He fell right asleep and made it through the night with no nightmares and no incidents.

Off to a good start! 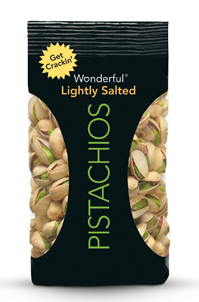 Posted by Editor at 7:28 AM No comments:

Our new little ham's plane touches down at BWI in about 20 minutes. It's midnight, and I am the designated "waiter upper" for his arrival. And I am so excited I can hardly stand it.

He was supposed to arrive yesterday, but there was a massive blizzard in Colorado (on April 17!!) that cancelled every flight out of Denver until about 10 this morning. He and his social worker were lucky enough to get on a late night flight for tonight, so here we go!

He will get to the house around 1:30 AM and I get to put him to bed in his own room for the first time in our house. It's a big day...


Safe travels, little man. Your new Mom is waiting for you.
Posted by Editor at 12:04 AM No comments:

And we have a New Ham to talk about

This morning we received confirmation that our little guy from Colorado is coming to visit on April 16 and that this visit (if it goes well) will morph into PLACEMENT automatically. So for those of you not "in the system," this means he has a 3 day visit but then does not go back to Colorado. He will stay with us for a month test, then contiguously for six months of foster placement and then into a permanent adoptive placement.

It's here! We get to be with our new son!

I am brimming with excitement, but of course it is only 6am so I have to wait until everyone else gets up to share the news. So I write it here!  17 months of planning and hoping and now it's happening!!! 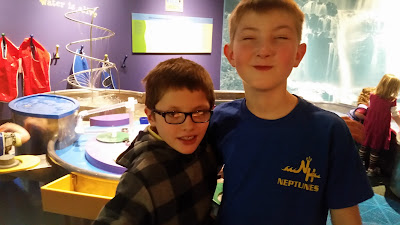 Posted by Editor at 7:18 AM No comments: