Behavior Modification that You can Do At Home!

So all the professionals can look on in awe -- I've created a behavior modification program right in my kitchen that works like a charm! It's the CHART Game (pictured below) 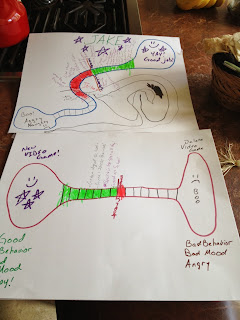 When to use it: If your kid is having a hard time understanding when they have been bad, or understanding why it is more important to be good instead of bad, it's time for the CHART Game

Here's how it works: Your kid picks a reward that they would absolutely do ANYTHING to get. In our case, Hamslice wanted to download a video game onto the iPad.

Mom labels both the good and bad behaviors so that they can be reviewed in the future by either mom and child, or read aloud by Dad when Dad gets home from work. The labeling also helps you catch them if they break rule #3 below.

Each time Mom redraws the chart after a reward or punishment (the red squares meet the red bubble or the green squares meet the green bubble) the chart gets longer. I started with 7 squares on each side, and now we are up to 55 squares on each side. The goal is to have the squares become the reward instead of the physical rewards of video games or cookies or whatever.

Posted by Editor at 2:36 PM No comments:

Many of you have been asking "How's Hamslice doing? What happened when school started again this year?"

So I have an update for you, and the good news is that so far it's pretty good stuff.

We wound up enrolling Hamslice in the local public school, right here in Federal Hill. And believe me I did so with incredible trepidation. When I went there to sign him up, there were some large scale mothers from Sharp Leadenhall there, yelling about stuff and blocking up the counter. but I carried through and after four attempts (on different days) was able to enroll him for fall.

My thinking was this: "It's a practice school. He can go here and learn to do school, and then we will see what's next." The flip side was this "If he can't handle even this school (where some pretty tough cases come through) then we know it's time for special ed or homeschool."

On our first day, I walked him to school and held his hand while things got started for the morning. He was the blonde in a sea of corn rows and little shaved heads. The moms mostly knew each other and were belly laughing and carrying on, meanwhile I was so nervous -- watching Hamslice to see if his nerves were under control. He, however, was a little champ. He did just fine.

Three days later, I get a frantic call from the office -- your son has flipped his lid. So I ran to school and found him in the nurse's office speaking in a high squeaky voice and hiding under the bed. Here we go, I thought.

But I took the words of AB to heart (from her visit this summer), and told him that we needed to eat some food and then get back to class. No more days off for freaking out, Mister. And POOF -- that was the end of any further episodes. To date, nothing even close to a tantrum. All better.

Now that school is actually about school, he is doing very well at math, his reading has exploded and we are all happy to see him mastering concepts one after another. He is very excited now about being the "good kid" and that means something to him now that there are others who are a little worse behaved than he is in school.

This week we bid our last therapist good bye, and we are flying solo. I haven't removed them from speed dial, but we are ready to try this ourselves. Here goes nothin!

Beware of the Bees!

This week the demolition began on our new house. All of the plaster needs to come down in all rooms so we can replace lead pipes, add HVAC, replace knob & tube wiring, and add insulation.

We hired Mr. Jim to do the demo because, man, that guy knows how to tear stuff up.  Two hours after he began swinging his sledge hammer, he was swarmed by something like 300 angry bees. Maybe more

Hambone got an urgent call from Mr. Jim, requesting three full cans of bee/wasp spray. He could hear the bees buzzing in the background of the phone call.

After the dust cleared, it all made sense. Just look at how many hives had been built between the roof and the plaster on the 3rd floor. Yikes!