It's Definitely a Control Thing

The battle for daily control wages on. Now we're into full on ridiculous territory, and I love it. This is such a normal kid situation and I've been prepping for years for it to come. These days the battle is about outer wear. SOMEONE won't wear a jacket, or boots or gloves or a hat.

During the Blizzard of 2016, Hamslice wouldn't even consider wearing a jacket. He played in the snow with Crocks and no mittens. And then of course he got sick.

I've resorted to refusing to drive the car until he gets a jacket on, just to show who is in charge. My secret delight is to have him in the back seat, ready for school (but missing his coat). I get to pull halfway out of the garage and then *discover* his missing coat, and then refuse to drive anymore until he goes inside to get a coat.

Day 1 I read an entire magazine. Day 2, I got 5 pages of Rocks & Minerals under my belt before he caved. Each episode takes less time.

Posted by Editor at 5:08 PM No comments:

It's a Control Thing, or is he a Junkie?

With all the snow days (hello two more this week) we have been a little more lax with our tablet and computer gaming policies. Seriously, we can only play SO MANY board games in a week before we can't stand any more.

And we have noticed there is *something* about the video games that act like THC or heroin or something in our little guy's brain, because he can't stop playing. Furthermore, his life seems to revolve around playing to the point where he tries to manipulate other areas of his life to get more game time. Consider this conversation:


"How long will I need to play Legos in order to earn tablet time?"


"It doesn't work that way"


"What do I have to build then, in order to earn tablet time?"

If I wanted to keep going with this conversation I could fill entire days with banal discussion about *any other* activity may be parlayed into earning tablet time. For instance, "If I eat 5 brussels sprouts, can I get 10 minutes of tablet time?"

We have even made him run on the treadmill for tablet time, which he will do for 90  minutes in a stretch just to get 30 minutes of tablet time.

The only other place I've seen this single minded drive has been with drug addicted adults and teens. This kid has dedicated his life to scoring time on the tablet, and then when he DOES get the tablet, he plays the most mindless games. Stuff without a plot, and just explosion after explosion. He drifts off to a place I don't understand.

I've been trying to figure out if it's a control issue outside of the game, like maybe he feels he is manipulating adults by scoring tablet time, because he knows we don't like him to use it. Once I explained to him that tablet time is at my sole discretion and that he can't "make" me give it to him, he calmed down a bit.

But um... so far 34 requests for tablet already today and it's 1pm.

Posted by Editor at 1:00 PM No comments: 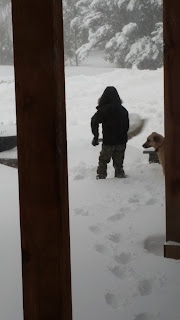 Last week was the Blizzard of 2016. We received nearly 3 feet of snow, and we have been digging out for days.

Today is the first time in 11 days that Hamslice is back in school. He had off starting the Friday prior to the storm, and then all of last week. By Thursday afternoon he looked at me and declared, "Mom I don't know how much more of this I can take!"

However, this snow storm gave him the opportunity to shovel, build snowmen and sled a little bit. This is all pretty exciting stuff for a little guy. He was pretty sure he would hate sledding until he actually tried it.

I suspect that he was doing most outdoor activities solely to get some hot chocolate afterward, but that's OK by me.
Posted by Editor at 11:02 AM No comments: