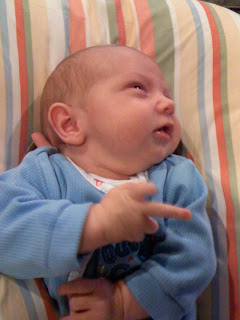 Hamslice has learned a new trick that I can't quite figure out. While he's sleeping, he manages to pee out the top of his diaper and soak all of his clothes, and the bed.

I thought I had figured it out when I started making sure that "the wee wee points down" when I put on new diapers, but that doesn't seem to fix the situation either.

Even better, Hamslice really dislikes being wet, so as soon as he performes this hydraulic feat he starts screaming as though the moon and the stars were falling from the sky. And he has figured out how to time this trick for 3:30 AM each day. 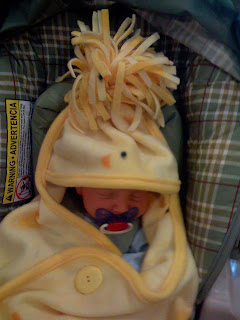 Yesterday was Hamslice's one month checkup with the pediatrician. He has already grown nearly an inch and gained 2.5 pounds! Clearly he's headed toward being tall and strong like his daddy.

He is also able to lift his head up on his own now, which seems like quite a feat because his neck just doesn't seem big enough to lift those super chubby cheeks.

On another note, some of you have asked how Maggie the dog is doing with Hamslice. So far she seems to be adjusting well -- each time we come home, she sticks her nose right into the car seat to make sure he's with us. And occasionally she'll give him a sniff while he's sleeping.

When he first came home, though, there was some confusion about who this new person was. I think she thought Hamslice was a new dog, and she was rather upset when Hamslice was able to sit on the sofa with us. As soon as she saw him on the sofa, she jumped up on the sofa herself, thinking "if the new dog can get up there, then surely I can be there too." She was a bit miffed when she was ordered back onto the ground.

She also thinks this "new dog" is a little noisy for her tastes. Some times when he's fussy, Maggie will wake up from her nap just long enough to give him the stink eye. Poor Maggie.
Posted by Editor at 1:47 PM No comments: 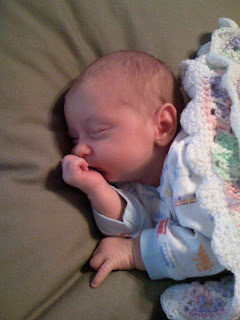 It turns out the reason I was getting a little frustrated with Hamslice was that I had the stomach flu. I was feeling puny and nauseated, but I figured it was because of the fatigue. However, the next night Hambone came down with it.

Trust me, this flu was less attractive on Hambone than it was on me.

Now that I'm feeling better, things are back on track. Hambone and I both are completely infatuated with the little guy. It's surprising how attached we've become.
Posted by Editor at 4:03 PM No comments: 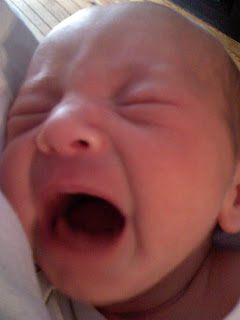 We've been seeing a little more of this lately than we were hoping for, but everyone says this is par for the course. I'm still trying to figure out how much exactly to feed this guy -- if I let him eat until he stops, then he throws up all over the place, and if I try to guess by myself, then he acts hungry all the time.

While I said all along that I didn't need child care books, I have started reading them copiously. They're a little helpful, but not as much as I had hoped. Maybe what I'm really hoping for is someone to sit next to me all day and tell me how to do this.

I think yesterday he had a sore tummy, because today he's much quieter and more cheerful...
Posted by Editor at 9:44 AM No comments:

In response to lots of requests for a picture of Hamslice with his eyes open, I am uploading this one -- his Super Star pose. His eyes are very dark blue/gray right now, but I suspect they will turn brown over the next few months like his Dad's.

Many thanks to the DV Gang for sending the cookies & balloons. Hambone and I had cookies for dinner last night. =) 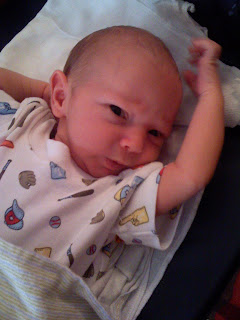 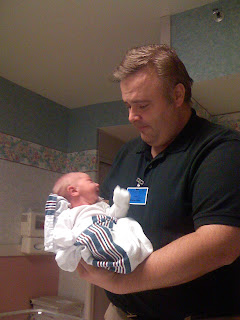 This picture was taken at 7am on Hamslice's birthday. He was about three hours old at this point, and it's the first time Hambone picked him up and had a good look. (We had seen him in the OR, but because I kept throwing up it lacked a little romance)

This morning was a peaceful time, filled with narcotics for me and baby-daddy bonding for Hambone.

Ah the miracle of birth.
Posted by Editor at 3:52 PM No comments: