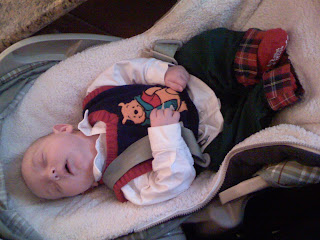 Yesterday and Today were picture days at Day Care -- Hamslice slept through the hours the photographer was there yesterday, my hope is they caught him today in his cute little outfit.

Surely he's the cutest baby in the place.
Posted by Editor at 4:01 PM 1 comment: 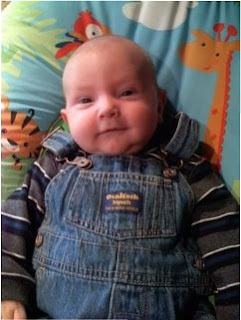 You know, I think I'm finally starting to "get" what motherhood means. And it's true that you can't understand it until you have kids of your own...

I used to gush over babies to the best of my ability before Hamslice, but there was a certain disgenuine nature to it because I was really just trying to get the words out before I got puked on.

Now that I have one of my own, I understand the gift that these tiny people are, and what a miracle they are in everything they do. It's overwhelming sometimes to think about how much this all means to me, and how much life will be different from now on.
Posted by Editor at 3:27 PM No comments:

Hawkeye in the Genes 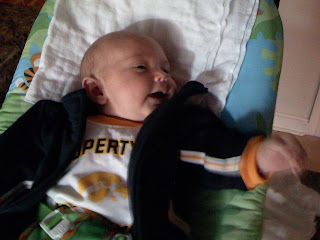 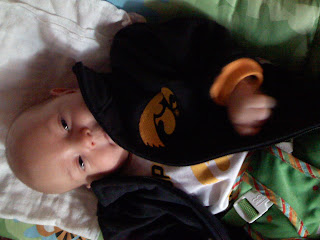 Hamslice is now growing so fast he's into clothes sized for six month old babies, even though he's only 2.5 months old. I can't complain though, because the "big boy" outfits are way cuter than all the sleepers.

Yesterday was Hamslice's first day of day care. He was sleeping peacefully when I dropped him off, and I thought for sure he'd be the cutest little boy in the place.

Around 11AM the day care called me and asked what they could do to get him to stop crying. Evidently, he started shouting soon after I left and hadn't stopped for three hours. The worker sounded a little stressed...

I went to pick him up at 3pm (a couple of hours early) and heard the worker muttering to a colleague "I just got him to sleep a minute ago and NOW she comes to pick him up. Sheesh"

Today I dropped him off and three hours later HAMBONE called me up and said the sugar factory next to the daycare had an explosion, and shouldn't we go get Hamslice in case there's an evacuation.

This whole day care thing is not as easy as I thought it would be.
Posted by Editor at 1:59 PM No comments: