On TARGET for Shenannigans

Target is my boys' ABSOLUTE favorite store. They beg and beg to go there, and when we arrive, they treat it like a wonderland of retail. And usually one of the two of them, if not both, starts to act up. There is a lot of running ahead of the cart, spinning in circles in the aisles.... lots of movement.

After all these trips to Target, the last time we went there, I OFFICIALLY TIRED of the goofing around. And I believe a little something in me broke. I said to the boys, "THIS IS WHAT IT FEELS LIKE TO SHOP WITH YOU." And I threw my hands up in the air and started racing up and down the aisles, spinning in circles.

Yes there were a lot of stares, and a few knowing smiles from other parents.

The boys slowly started fading away from me into other aisles, so I started shouting, "HEY I AM [LITTLE HAM]'S MOM. AND HE'S RIGHT THERE (pointing at him) AND I LOOOOOOVE HIM!" 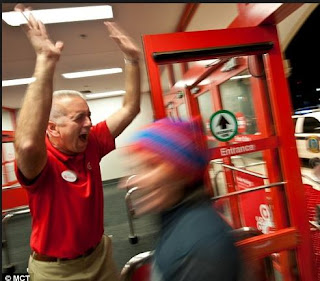 Never in their young lives have they been so mortified. Since then, they have been on their absolute best behavior in Target. All I need to say is, "ARE WE PLAYING THE CRAZY IN TARGET GAME AGAIN? I'M IN!!!"

I believe I have won. Just this once, score one for Mom.
Posted by Editor at 1:37 PM No comments:

My little boys are starting to grow up. In April, we had a "Come to Jesus" again with the school about Hamslice, where the teachers were frustrated with him again due to his lack of willingness to do any schoolwork. I was completely caught by surprise because *I* thought things were going well, using the adage "no news is good news."

I made a contract with Hamslice, where if he was able to do good work and not have any notes home from his teachers for the rest of the year, he could move his bedtime to 8pm from 7:30. If he didn't keep the contract terms, he owed me $100 payable in sticks @$.03 per stick. (That's over 3000 sticks, for the math challenged who are reading this)

And like a miracle, he fulfilled his contract. Furthermore, he decided that he liked the way he was treated by the teachers and administration when he actually tried a  little. It has been a turnaround that has lasted for 6 weeks now. I am so hopeful. 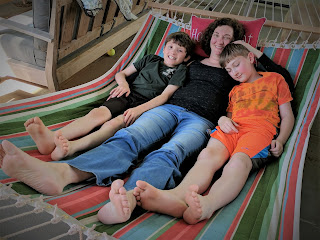 Meanwhile Little Ham has been making his way as a chorister, and is the creative department for the family. He just completed his King Tut costume for Living Museum day, and it was fabulous. Little Ham has been making huge strides integrating with the family. Yesterday, Hambone and I spent some time comparing this year to last year, and the growth has been really impressive. He is one of the family more often than he is trying to not be part of the family. We're at about 80/20 now, vs last year at 10/90.

The boys are also experimenting with driving go-carts and our golf cart. It's great vestibular stimulation and it provides a feeling of adulthood for the boys. They are so proud of their driving abilities, although Little Ham still corners a little fast in the golf cart, throwing himself out of the vehicle entirely. Hamslice is the self proclaimed expert of driving, and he is now a little critical of everyone's driving. 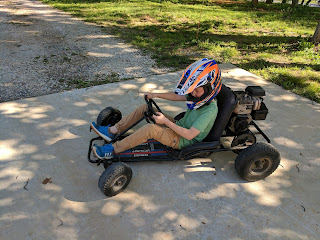 We also had the pleasure of nursing a baby bunny for a few days -- the boys saw a hawk drop the baby bunny out of its claws, so they took it home. The bunny was so young its eyes were not yet open. We fed it Kitten Milk Replacement and watched as its eyes opened and it became strong enough to hop. The boys liked learning that it takes three swallows for a bunny to drink one drop of milk, and they were sad but hopeful when it was time to say goodbye to it.
Posted by Editor at 6:43 AM No comments: