Hambone and I attended a wedding this weekend, and I left my "fancy" shoes out in the living room. The next morning I found Hamslice walking around in them.

Quite a change from his usual preference... he generally asks for hiking boots.

Everybody gets a day with sparkly shoes, I guess. 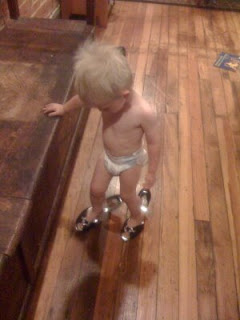 Posted by Editor at 8:19 AM No comments:

It's Rhubarb season in Maryland, and as a tradition, Hambone, Hamslice and I go to the Farmer's Market (conveniently located under the highway 83 ramp) and get some nice, fresh stalks. Then we bake Rhubarb Cake, which is Hambone's all time favorite

Hambone always wants to get twice as much as is needed for the recipe, so we make a superbly rhubarby cake, which I like quite a bit.

This year, Hamslice give me a hand with the batter. He was such a good boy -- he sat on his chair for more than 1/2 hour watching me mix, chop, fold butter and didn't get antsy. As a reward he got to lick the bowl. =) 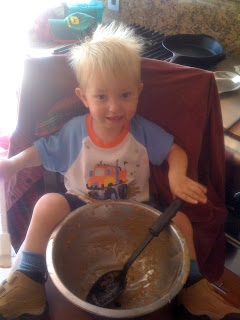 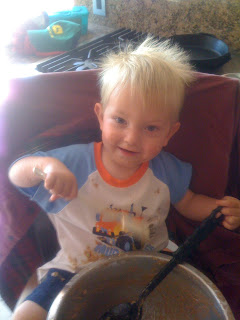 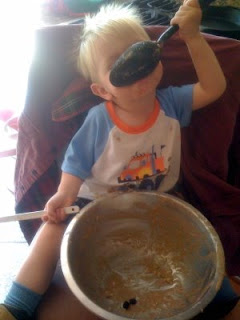 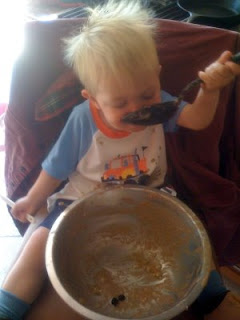 Posted by Editor at 8:55 AM No comments:

??? Hamslice seems determined to figure out the whole Potty Chair concept. When I brought one home from Target the other day, he sat on it like it was a pony and scooted all over the house and yard on it.

Later that night he wanted to put poopies in the potty, so we tried it, but were both scared and a little traumatized by the event.

Since then he's asked to pee in the potty, but instead of actually Getting On the potty, he crouches next to it and pees on the floor.

To encourage him, I've started announcing when I go to the potty. And, little trouper that he is, when he hears that I have gone to the potty, he points his wiener under the door and pees toward me to show solidarity.

Ahhh. Such wonder.
Posted by Editor at 8:31 AM No comments: