And the Truth Comes Out... A memoir from Hamslice

Today Hamslice and I had the newly-rare experience of riding together in the car... just the two of us. And since we have been busy with Little Ham, I wanted to check in, so I asked Hamslice if he noticed anything different about me and Hambone now that we're not all up in his grill all the time.


He said, "I noticed you're a lot nicer now that I'm not spending 100% of my time trying to get revenge on you." And I busted out laughing. It was a huge belly laugh of acknowledgement and relief.

Earlier conversation had included a litany of things Hamslice dislikes about Little Ham, but after this revelation, we both agreed that we have a lot to be thankful about. Little Ham nudged our family dynamic in this very positive new direction and it has improved parental relations quite a bit with Hamslice.

Hamslice then detailed his revenge plotting, his timing and schemes against me all these years. "I know just how to push your buttons, Mom," he said.

The 18th marks one month of our new family dynamic, and I believe we're going to do just fine. Little Ham and I have been working through control issues and how to handle shut downs, with some good progress.

And this morning we talked about how hard Mother's Day was last week. I asked him if he was struggling with it and he said, "yeah."  I said it was a lot of pressure to put on someone who just arrived in a new home a week ago. He seemed to appreciate the fact that I noticed, and I told him how brave he was to put together cards and make his way through the holiday anyway.

Hamslice has been an absolute trooper through this process as well. He went from being 'in love' on day 1 to 'in hate' on day 3 to starting to figure it out this week.

In the mornings they like to go outside to pick up sticks and rocks as a way to earn some spending money. They have realized that teamwork is the way to greater profitability, and they are starting to communicate with a greater goal in mind. This is fixing many issues between the two of them, and it provides a way to soothe their constant competition for parental attention.

It feels like we're starting to become a family. =)

And then there's this. (handkerchief please)

This weekend is Mother's Day, and I was not sure what to expect from Little Ham. Hamslice got the flu so I know there is no card coming home from school from him. 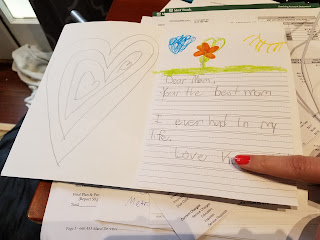 Yesterday Little Ham and I did some good healing work together. Our work was in the morning, and after school he asked for two of my cookies, he ate them AND said they were good.

I've been getting some questions about what it looks like to take someone you don't know into your home and pretend to be a family after one fateful Monday night. Instead of trying to *actually* explain it, I'll tell you about making cookies.

On Saturday, I decided to make homemade cookies as a treat for my boys. Little Ham is very excited about cooking and wanted to help, so of course I let him. However, cookie baking is a pretty loaded subject for someone who has been through 6 homes. Apparently every single new mom he's had (including his biological grandma) made cookies together with him as an ice breaker.

While we were mixing ingredients, a lot of stories came out about who would let him snoop what during the process. Grandma let him eat butter and chocolate chips. Mom L let him have some of the batter, and so on. I made him wait to snoop until we were at the very last step before baking, which was not very popular -- someone was pretty sure he wanted to eat a whole stick of butter.

At the final taste/snoop time, Little Ham took a bite of dough and said "This tastes TERRIBLE" and spit it out. He then told me how much Mom L's cookies were better than mine.

I baked the cookies without his assistance, because he then wanted to leave to go play with Hamslice. 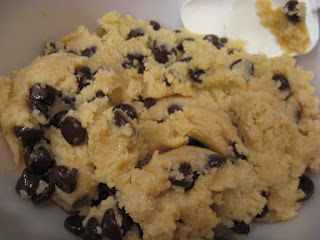 After the cookies were baked, he tried one and again insisted they were terrible and he couldn't even finish one.

The next day he forgot that they were my cookies, and he ate one and asked for another. I smiled hugely, and he then changed his mind and reminded me that the cookies are gross.

The next day, he took one store bought cookie in his lunch *and* one of mine, but I pretended to not notice. When I asked about the cookie later he insisted that he threw it in the trash.

When I brought this up in therapy, Little Ham told the therapist that Mom L's cookies were "Magical."

And so this is what it's like to have a new kid in your house who has a whole life they've already lived without you. It will take time and a lot of love, but I still believe that maybe in a year or two, he'll eat my cookies. Stay tuned.

A note about honeymooning

Much like being married, I don't know that there's a specific second when you know the honeymoon is over, it just sort of "occurs."

These last few days we have been tested by Little Ham, and to our credit, he's using his best material. However, he doesn't have any idea who he's dealing with here. Our ability to deflect meltdowns and oppositional behavior borders on professional level. He keeps trying to control us, but that just doesn't seem to work either.

It seems that we get long spurts of good behavior, peppered with humongous meltdowns.

We are also learning about tag teaming, where sometimes either Hambone or I will be at loggerheads with Little Ham, so the other takes over for the evening. That seems to diffuse further bad behavior, and gives both parent and child a chance to reset.

We had a tough Thursday last week and a tough Monday this week, but in between we have a lot of laughter and hugs and smiles. We are still enjoying ourselves very much.
Posted by Editor at 2:10 PM No comments: