So this is me just venting for a minute in the hopes that sharing this with all of you will help me find the patience I need until we move into another phase.

The issue is: Screwing Around

At first blush this might not seem like such a big deal, but it's incredibly frustrating. I've been trying to get Hamslice to dress himself... all by himself... for a couple of weeks now. I'll ask him to put his clothes on and then come downstairs for breakfast. Simple enough, right?

After 20 minutes of hearing footsteps and some grunting and rustling from his bedroom, I'll go to check in on him; finding Hamslice completely nude, standing with one foot on top of his dresser and wearing underpants on his head. His Buzz LightYear toy will also have one sock over his boot.

There's just no giddy-up in this boy these days. He knows how to actually get dressed, he just likes screwing around so much more.

Now that I write it all out, he sounds a lot like me when I was a kid.
Posted by Editor at 10:32 AM No comments: 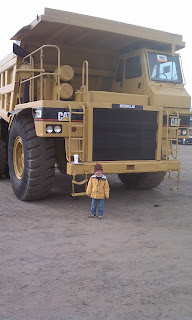 Hambone took Hamslice shopping for trucks over the weekend. This one was Hamslice's favorite, and he asked if he could buy it and take it home to put in the garage.

Hambone asked Hamslice how much he thought this truck might cost, and Hamslice said, "It's probably about $20."  and when asked where the $20 would come from, Hamslice thought for a while and said, "I think you have $20 in your wallet."