In a burst of over confidence after having such an enjoyable time with our new goats, I volunteered to take a pair of un-homed Donkeys from the animal rescue in PA as well. They were to be miniature donkeys, pets if you will, and they were described as the greatest family entertainment since Walt Disney.

The donkeys arrived by horse trailer in the middle of a dark and stormy Sunday night while the boys were away at camp, As soon as the donkeys exited the trailer, they looked at each other as a bolt of lightening streaked across the sky and HHEEEEE HAWWWED as loudly and as many times as they could without passing out. I have never heard an animal make a sound louder than these donkeys. Hambone and I looked at each other with grave uncertainty.

The animal rescue people mentioned that these donkeys were intact males, "Jacks" if you will. And then they got in their truck and left us with a couple of royal Jack asses.  All through the night and the next day we heard voluminous HEE HAWWWING and the donkeys fought with each other as hard as they could. For instance, one would sidle up to the other, shoulder to flank in an adorable manner, and then reach down with teeth bared to bite the hell out of the other's leg. Or they would run up to each other and bite each others' necks and backs.

The Donkey Rage spread out to the goats and chickens as well. The only person who enjoyed the donkeys was Elwood, who would goad the donkeys into chasing him along the fence. Elwood the dog was sure this was a game, but judging by the donkeys' eyes, this was a murder mission. Lucky for all, the fence kept them separated.

We also started getting a few passive aggressive texts from the neighbors about the extreme noise of the donkeys. The noise just never got better.

That Wednesday, just a few days from drop off day, we begged the rescue to take the donkeys back. Mercifully, the trailer arrived a few hours later to take one of them away. The second left on that Sunday just a few hours after the boys returned from camp.

And that was the donkey adventure. Memorable. Noisy. Brief.

And the neighbors rejoiced. 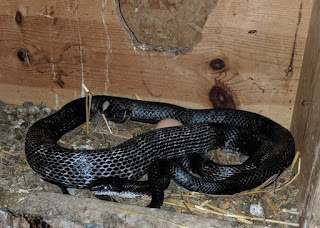 So my Middle Schooler rides the bus to school now, 45 minutes in the morning and 30 minutes in the afternoon, and he is receiving a Master's Degree in adolescence. Little Ham is physically developing a little faster than Hamslice and is besieged with curiosity and ideas about his body and... others' bodies.

Unrelated to the bus, Hambone and I decided to attend an event without the boys -- a 2 hour meeting with a church group.  While we're gone, Hamslice calls us many times, completely beside himself regarding Little Ham's use of my laptop computer.

We rushed home from our event and the boys were "already in bed" when we got home, so I looked at the browser history and search word history on my laptop. Sure enough, there were little boy queries about "boobs" and "sex people" and so on. They had discovered some pornography sites, which were handily stored in my history.

So what to do.

Well, Mom had 3 brothers growing up and she knows a thing or two.  And she is a fan of the theater.

Fast forward to breakfast, Mom comes into the kitchen all flustered with the laptop open to the worst of the pornographic sites that the boys had viewed the night before. I declared that the website had added code to my computer, and now this is the only thing that shows on the computer anymore and that I will need to do a FACTORY RESET to get rid of it. Then I just Left The Site Up on my screen all through breakfast, set on the counter right behind my face for all of breakfast.

Did I yell at them? No. Did I make threats? No. I feel like that was enough. I only wish I had the presence of mind to get a pic of their shamed faces as they poked at their shredded wheat.

(Then, of course, I changed the login to my laptop to keep them out of there forever)

Two weeks later, I get a call from school that Little Ham is using his school computer to show his classmates pictures of penises. The school asked if I had recommendations about how to handle it, and I explained about the situation above. The school followed my lead -- they took away Little Ham's laptop, replacing it with a desktop computer that he has to wheel around on a cart like the scarlet letter.

I said this was a great idea, and maybe they could also put a bell on it.

These boys. They have No. Idea. who they are dealing with. Mwah ha ha
Posted by Editor at 7:25 AM No comments: