Yesterday Hamslice and I walked through the Cross Street Market on the way home from the bus stop. All the vendors were decked out in hearts and all the Valentine kerfluffery that comes with this time of the year.

Hamslice liked all the hearts and thought they looked nice. Then he asked me in a very serious voice, "Why are the all red, instead of one half red and one half blue?" 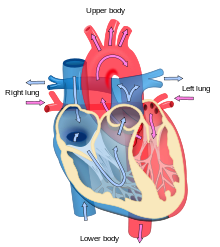 I asked him to explain his question because he asked it like an adult -- and I could tell there was more to the question than aesthetic preference. He said "When the blood comes back from the body, it doesn't have any oxygen, so it's blue. That makes half of the heart blue. The other half is red because the blood is ready to go back into the body."

I said that this was definitely true, and that the hearts he saw in the market were "Marketing Hearts" that are just supposed to make people happy, and that biology hearts (the real hearts in our body) are half red and half blue.

Thinking back, Hamslice just made a heart-shaped thank you card for his grandparents, and I believe he colored it half red and half blue. I didn't think about it at the time.

I don't know exactly where he learned this, but I suspect it was part of our marathon Science Center day during Christmas Break.

But I have to rock back on my heels in amazement, just for a minute. Wow.
Posted by Editor at 10:23 AM